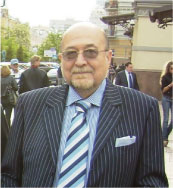 Alessandro Anastasi was born in 1938. In 1961 he graduated with honors from the University of Messina specializing in law.  In his university career, which began in 1965, he passed all stages: from assistant to professor. An evidence of his high recognition was government decree on awarding him the title "State professor" in 1985.  He has taught labour law, labour sociology and legal statistics for students of three faculties of the University of Messina - law, economics and political science for 43 years. Simantaneously he is a professor at the Graduate School of public administration in Italy.  At the same time he serves at the University of Messina as: Vice-rector for international relations, head of the labour law department, Director of the labour law section of the European Union and industrial relations. He also performs duties of a chairman of the University of Messina, is a member of the "European Legal Experts", member of the Scientific and Technical Committee of the Regional District Messina.  He lectures regularly on labour law at Sorbonne University in Paris, universities in Santiago Compostela, Cordoba and Ovideo, Cracow, Helsinki, Szeged and other European and North American universities. Cracow University of Economics in 2005 awarded him the title "Honoris causa".  He is a Chairman of the University of Socrates, arbitration court judge, lawyer, chairman of the Italian-Polish Association, former chairman of Lions Club "Messina Lonio". He was also a coordinator of the Scientific and Technical Committee of the services and work in the district of Calabria, legal expert of the Committee for Environmental Protection in Sicily, member of the Scientific and Technical Committee of the Regional District of Messina, and he also was a member of the Center for evaluation of the municipality of Messina and a municipal expert in Milatso. Alessandro Anastasi is an editor of the international research journal in Canada, director of "Atti della Accademia peloritana dei Pericolanti" in Messina, and "Analli della Facolta di Economia e commercio", chairman and organizer of several major European demonstrations: "Workers and trade unions of European enterprises, St. Vincent "1982," First European Meeting on new trends in labour law "Taormina 1985; I, II, III, IV, V European multisectoral seminar on studying in Canada, Giardini-Naxos, 1992, 1993, 1994, 1996, 1997; bilateral and tripartite workshops with the universities of Cracow and Kyiv.  Alessandro Anastasi is an author of more than one hundred scientific papers, including reputable scientific works which characterize him as a scientist: "Models of manufacturing and trade union of democracies," "Employment. National experience", "Globalization, labour, social security", "Europe. Employment policy". He is a member of the Legal Committee of the National Scientific Research Council and the Advisory Committee of the National University Council.  Alessandro Anastasi makes an important contribution to the development and increasing international prestige of KNUTE, primarily by having initiated (together with A. Mazaraki and R. Borowieckii) establishment and implementation of international project "The annual trilateral (Kyiv National University of Trade and Economics - Cracow University of Economics - the University of Messina) scientific and practical symposium".  All six sessions were devoted to social, environmental, economic and legal aspects of small and medium enterprises, business globalization. A. Anastasi has played an important role not only in the organization of two workshops in Italy, but also in the preparation of factful publications on the results of all six workshops.